Visit to the Palace of Knossos

As you know, Crete is not only sea and paradisiac beaches but also ancient history of the Minoan civilization. If you want to take a break for a day from the “beach life”, a visit to the Palace of Knossos in Heraklion certainly is not a bad idea. So … let’s go to brush up on school memories before starting the visit … Where is exactly the Palace of Knossos? What era does it go back to? What can you admire inside? What does the legend of the Minotaur tell? Surely if you are passionate about history you will have many questions about it, I will try to do my best to describe my visit to this open-air museum.

A little bit of history

The Palace of Knossos is located in the heart of Crete, few kilometers far from the city of Heraklion. It was built on the ruins of an older building dating back to 2000 BC. and perhaps destroyed by an earthquake around 1628 BC. As an important center of the Minoan civilization, the Palace of Knossos is linked to the ancient myths of classical Greece and known through the legend of  Theseus and the Minotaur. The legend tells that Minos, king of Crete, had built a labyrinth to enclose the Minotaur born from the union of his wife with a bull. Thanks to the archaeological excavations, the Palace of Knossos was rediscovered in the contemporary period between 1878 and 1931. 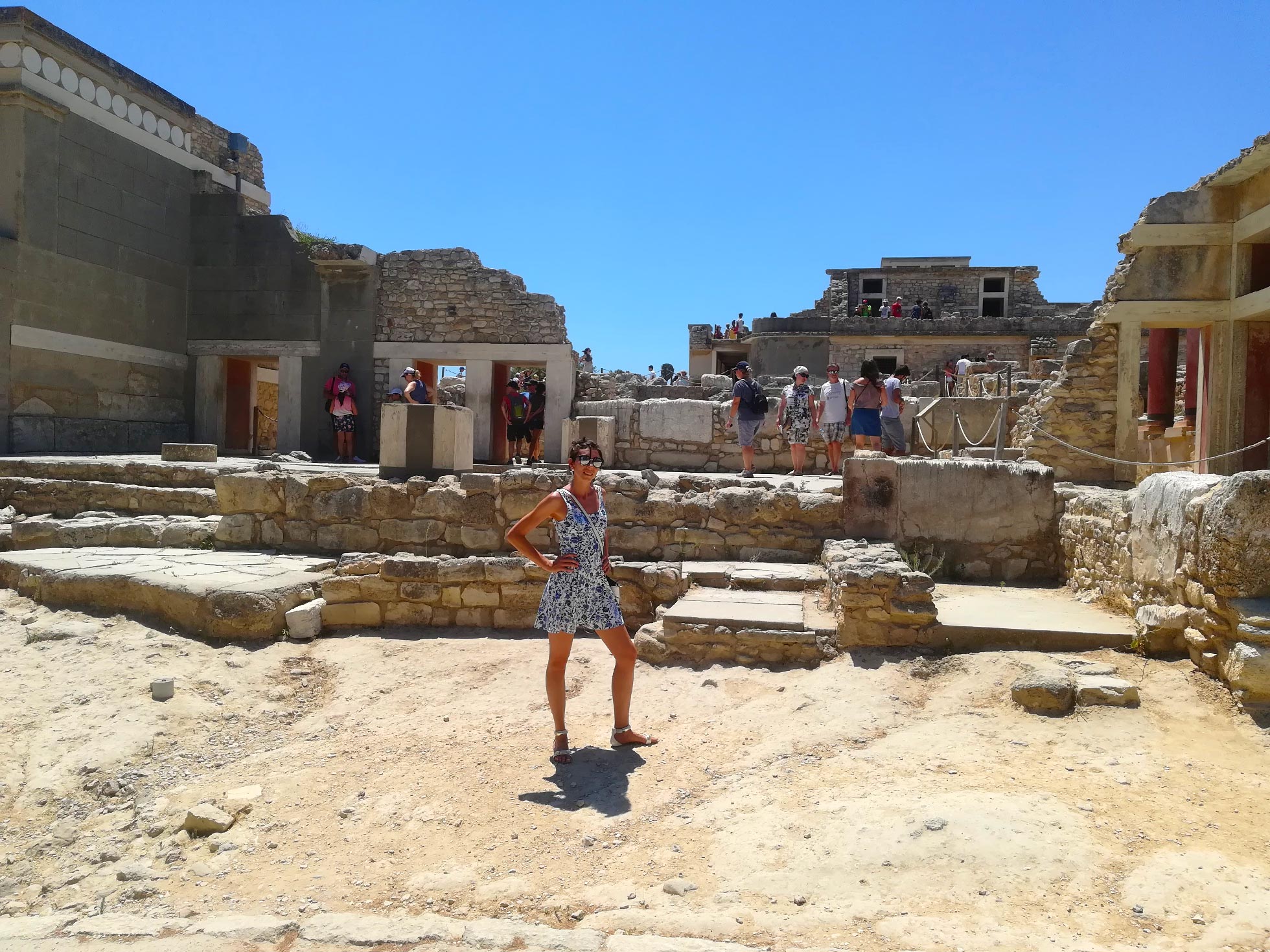 What you can admire of the Palace of Knossos

Historical hints let us guess that the Palace of Knossos was the political, religious and economic center of the Minoan maritime empire and also had a sacred purpose. Walking through the ruins you will realize that the original structure, covering an area of 22,000 square meters, was very complex and intricate. Inside you can admire the ruins of the palace but also copies of the wonderful frescoes that surfaced during the excavations. Yes, copies, because everything that was discovered thanks to the archaeological excavations needed restoration. The restoration works were carried out using large quantities of reinforced concrete, this working method was widely criticized as the material used was unknown to those of the ancient Minoan civilization. 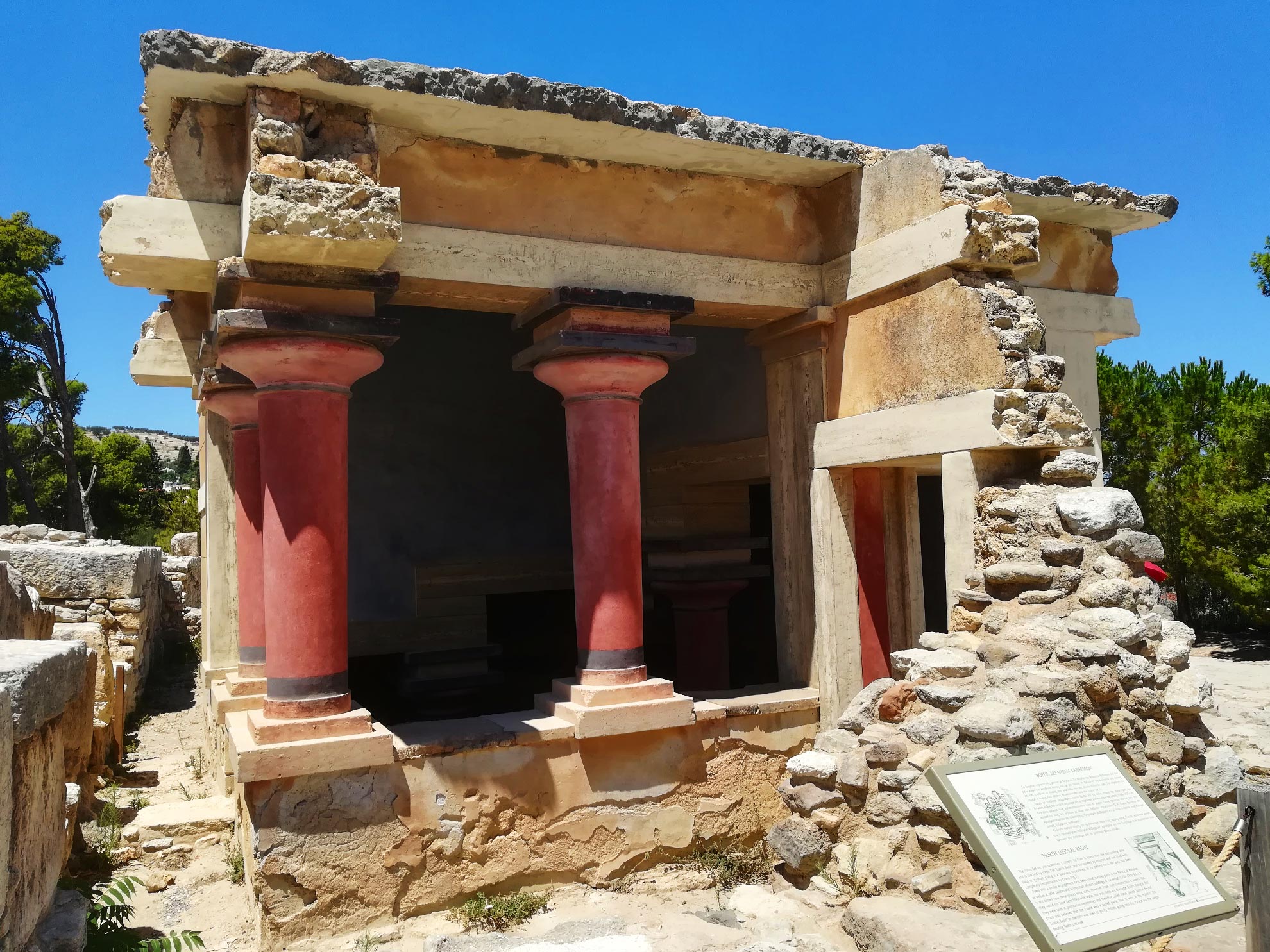 First of all the Palace of Knossos is characterized by its extension, you will notice it by entering the archaeological site and walking inside it. The dark red Minoan columns with black capitals and golden borders will surely catch your attention, you can admire them at the entrances of the building. Also noteworthy are the brightly colored frescoes, in particular the Bull-leaping fresco, a lively painting depicting a bull thrown at a gallop. In the northern part of the palace, take a look at the giant pithoi, large terracotta jars where wine, olive oil and cereals were stored. I leave everything else to your imagination, loose yourself in the ancient Minoan civilization, close your eyes for a moment and dream how life could have been like in the ancient palace of the Minotaur. 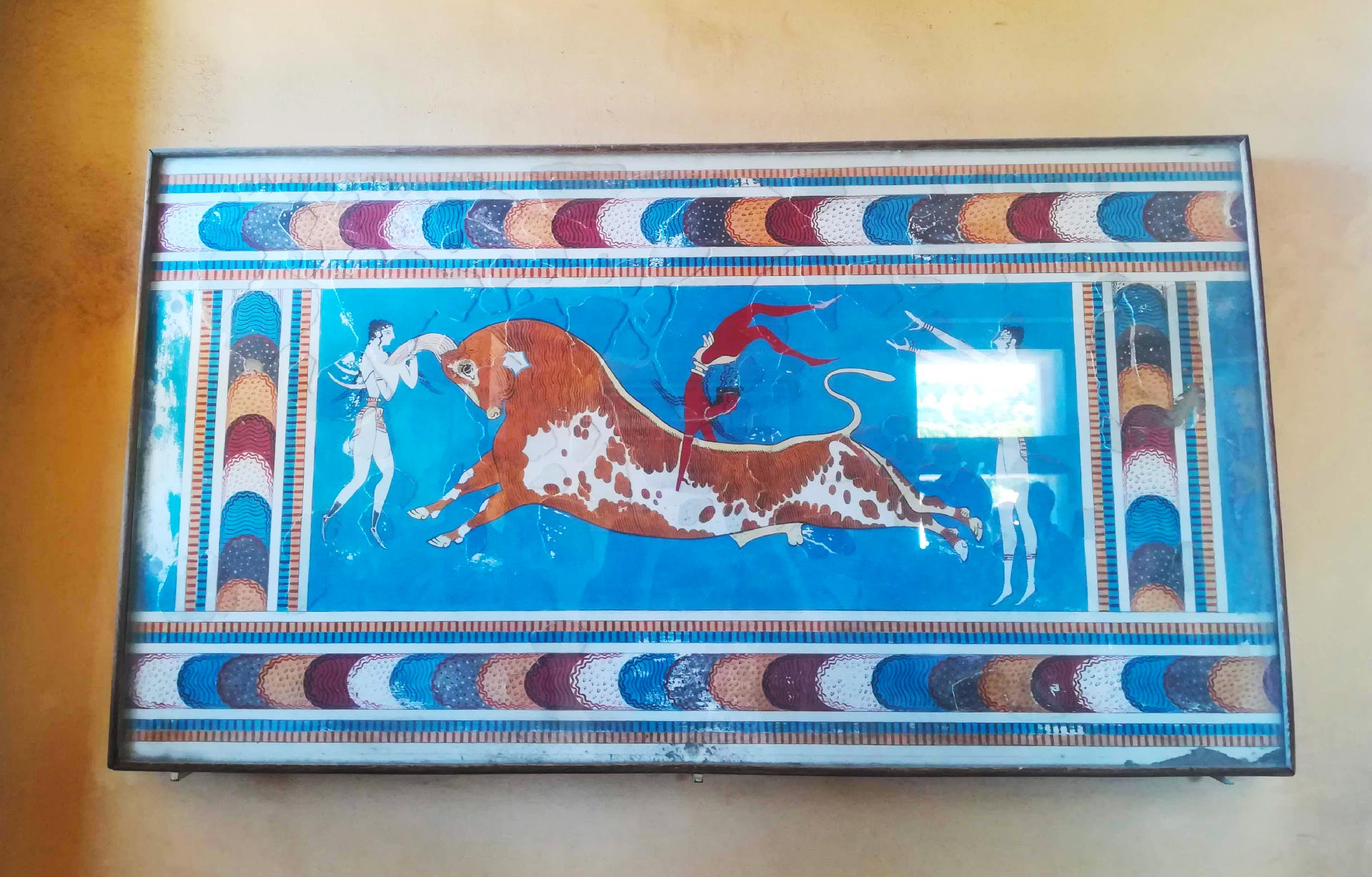 The Archaeological Museum of Heraklion

Was the Palace of Knossos not enough for you to dive into the ancient history and into the past? If so, then I suggest you to continue your journey to discover the Mycenaean civilization at the Archaeological Museum of Heraklion where a vast collection of finds will await you. Recently renovated, the museum displays the most representative artifacts of all the historical periods of Crete, from the Neolithic to the Roman era (5,500 years). Inside you can admire a vast collection of artifacts, work tools, furnishings, household objects, decorative statuettes and frescoes that can be traced back to the Palatial and Pre-Palatial period. 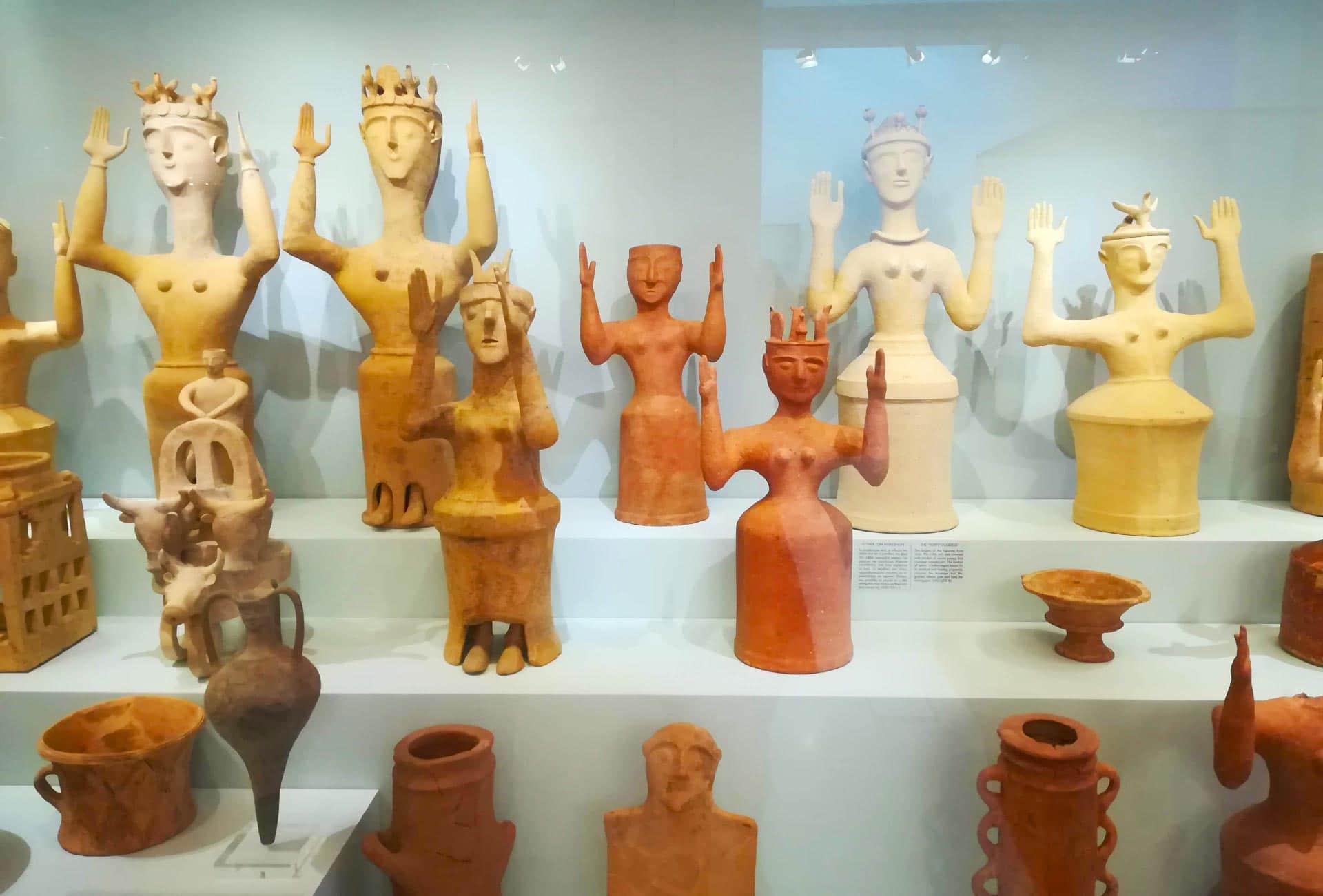 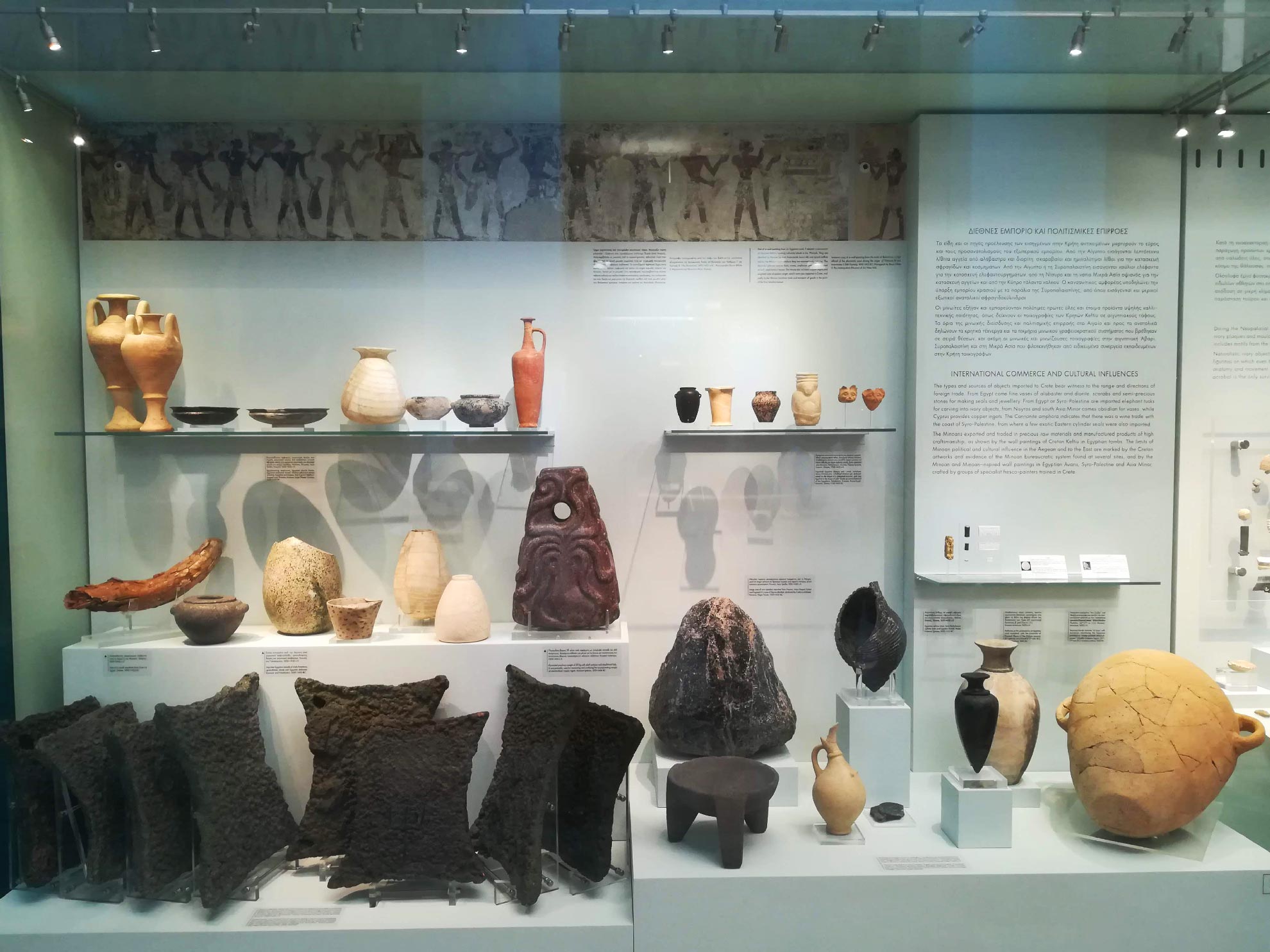