The valley of the Temples in Agrigento, the largest archaeological site in the world

Thus began my journey in Sicily: a hot, very hot afternoon in early August we reach San Leone. After having arranged our bags, we decide, without even thinking about it, that we want to visit the Valley of the Temples in Agrigento. You’ve all heard of it, since primary school history books always show pictures of the Hellenic temples kept inside. So we start driving, San Leone is really close to the Valley of the Temples, in about fifteen minutes we are already at the entrance car parking. Actually there are two entrances: one is near the Temple of Juno and the other one near the temple of Demeter, we choose the first.

Discovering the Valley of the Temples

As I already mentioned, as soon as we head into the archaeological park, we immediately come across the Doric temple of Juno. Built between 450 and 440 BC and characterized by a truly imposing structure, it is composed of 34 columns and reaches a length of more than 40 meters. The atmosphere of this magical place is emphasized even more by the lights of the sunset: yes, we cross the the threshold of the Valley of the Temples at about 18.00, and we are therefore lucky enough to admire the archaeological area surrounded by the golden and rosy shades of the sunset. Thanks to the colors, the beauty of the place is emphasized even more. 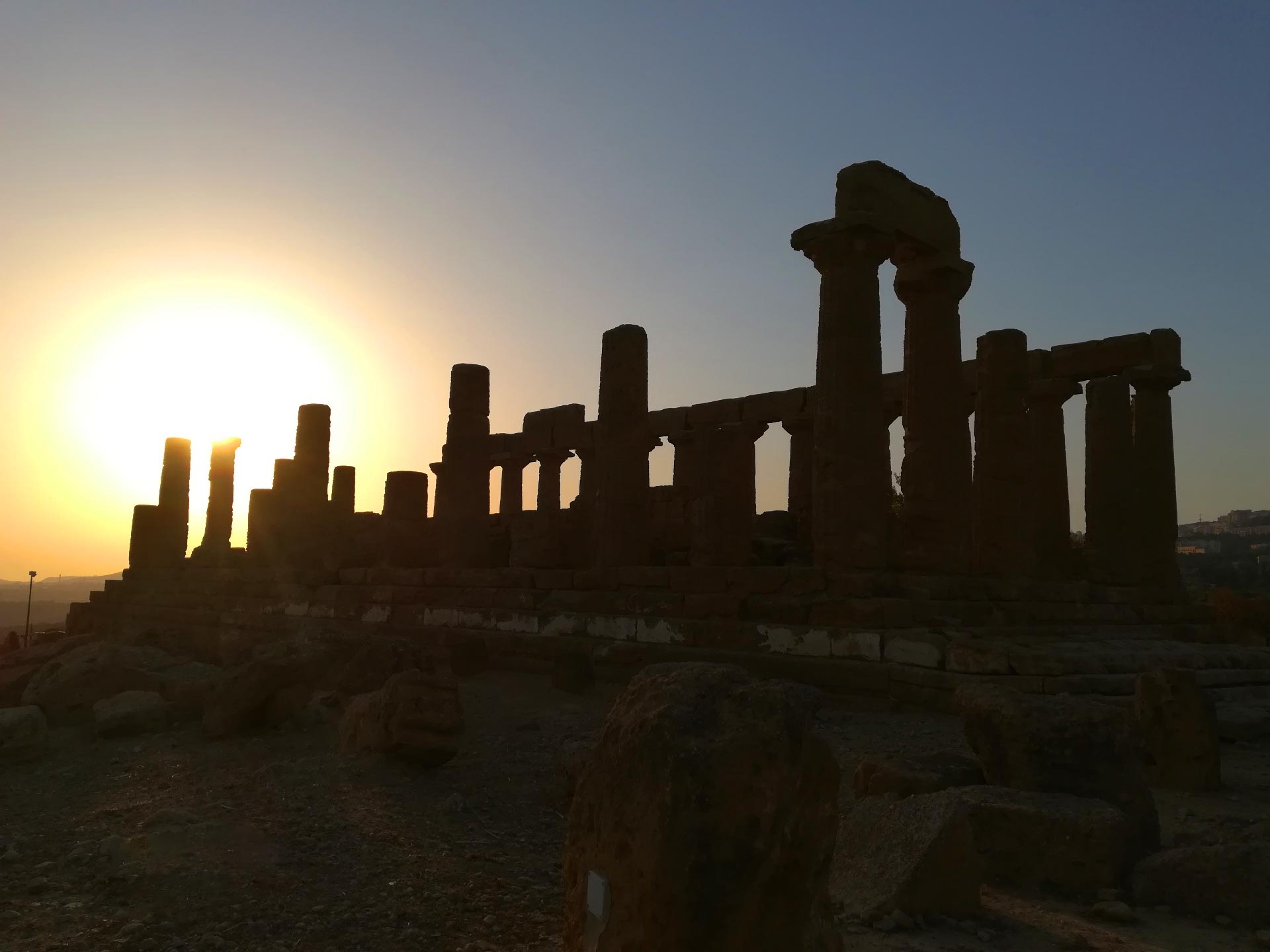 The Temple of Concordia

We are in the heart of the Valley of the Temples, in front of the Temple of Concordia which, despite its 2.400 years old, it is still intact and displays proudly its columns, its pediments, its stairways. Browsing the web, I even discovered that the color of the temples at the time of Magna Grecia was not absolutely the gold that we see today. The colors of the plaster used at the time were in fact white, red and blue: these used for the frieze and the tympanum, while the white used for the columns and all the rest. Would you have ever said that? Pop Art was already born during the fifth century BC, try to imagine the temples painted in this way! 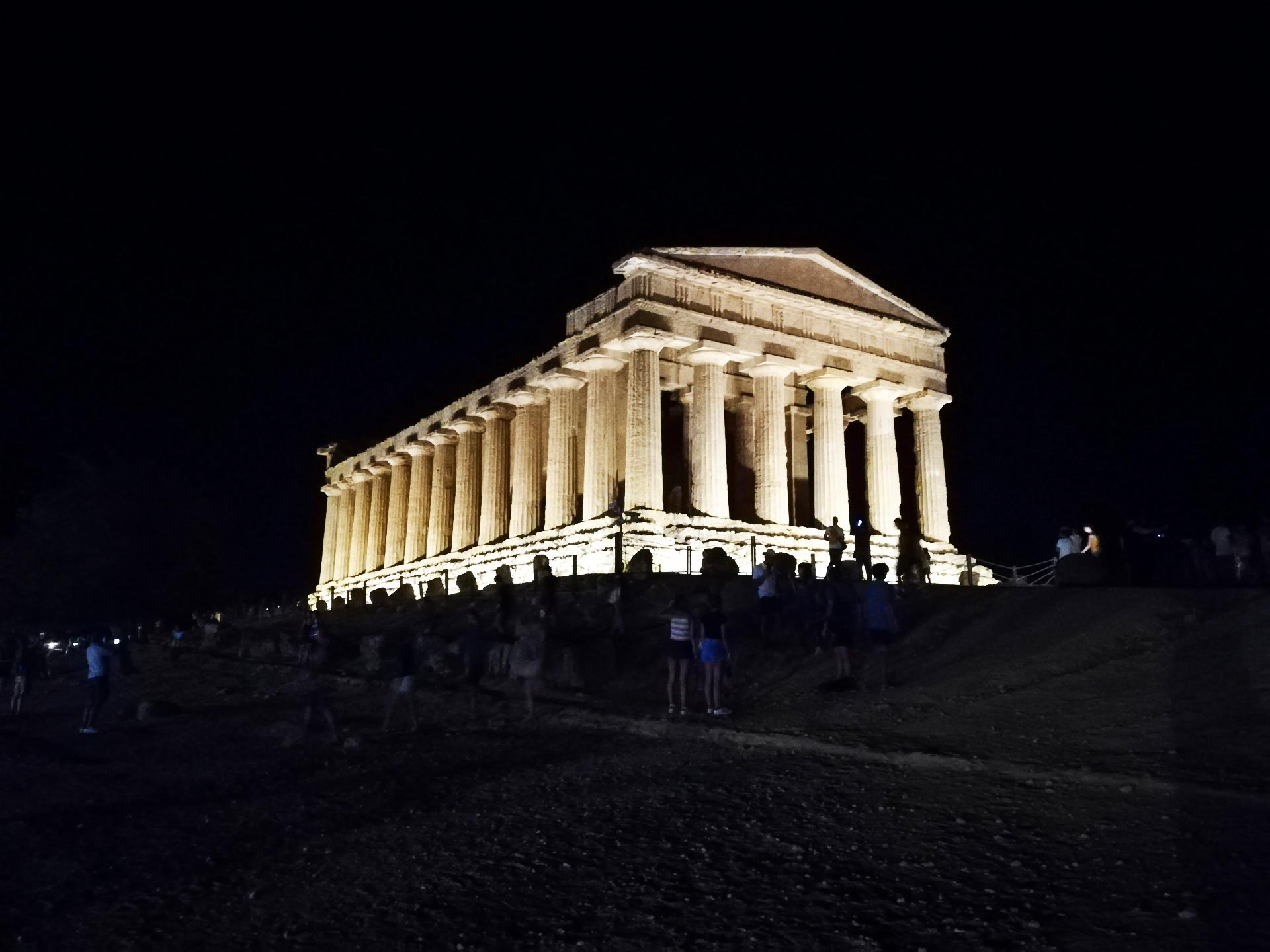 The Temple of Hercules or Heracles

With nightfall, the atmosphere inside the Valley of the Temples becomes increasingly magic and immersive. We stop to admire what is left of the Temple of Hercules (Heracles): 8 columns on the south side which, with twilight, stand out clearly against the darkness. It is the oldest of the Agrigentini Temples and, despite being practically destroyed, the high columns are clearly visible from afar and their grandeur represents the strength and power of Heracles. Historical sources say that in the temple there was an artistic painting that represented Hercules as a child while strangling two snakes. In the painting Jupiter is observing the scene surrounded by other deities and admires the extraordinary feat. Even the parents of Hercules, the father Anfitrione and the mother Alcmena, admire him surprised and anxious. How much history has gone through the Valley of the Temples? 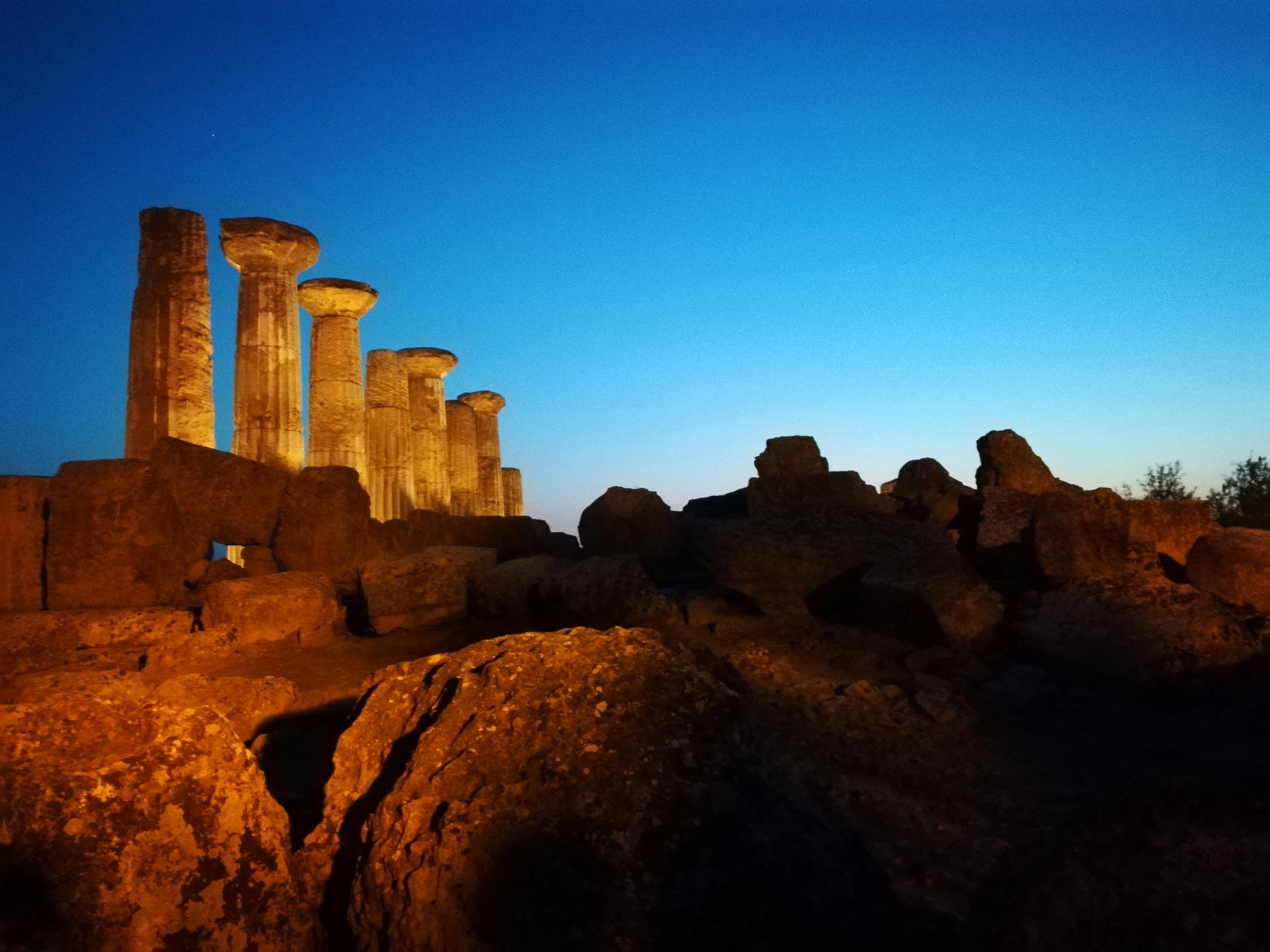 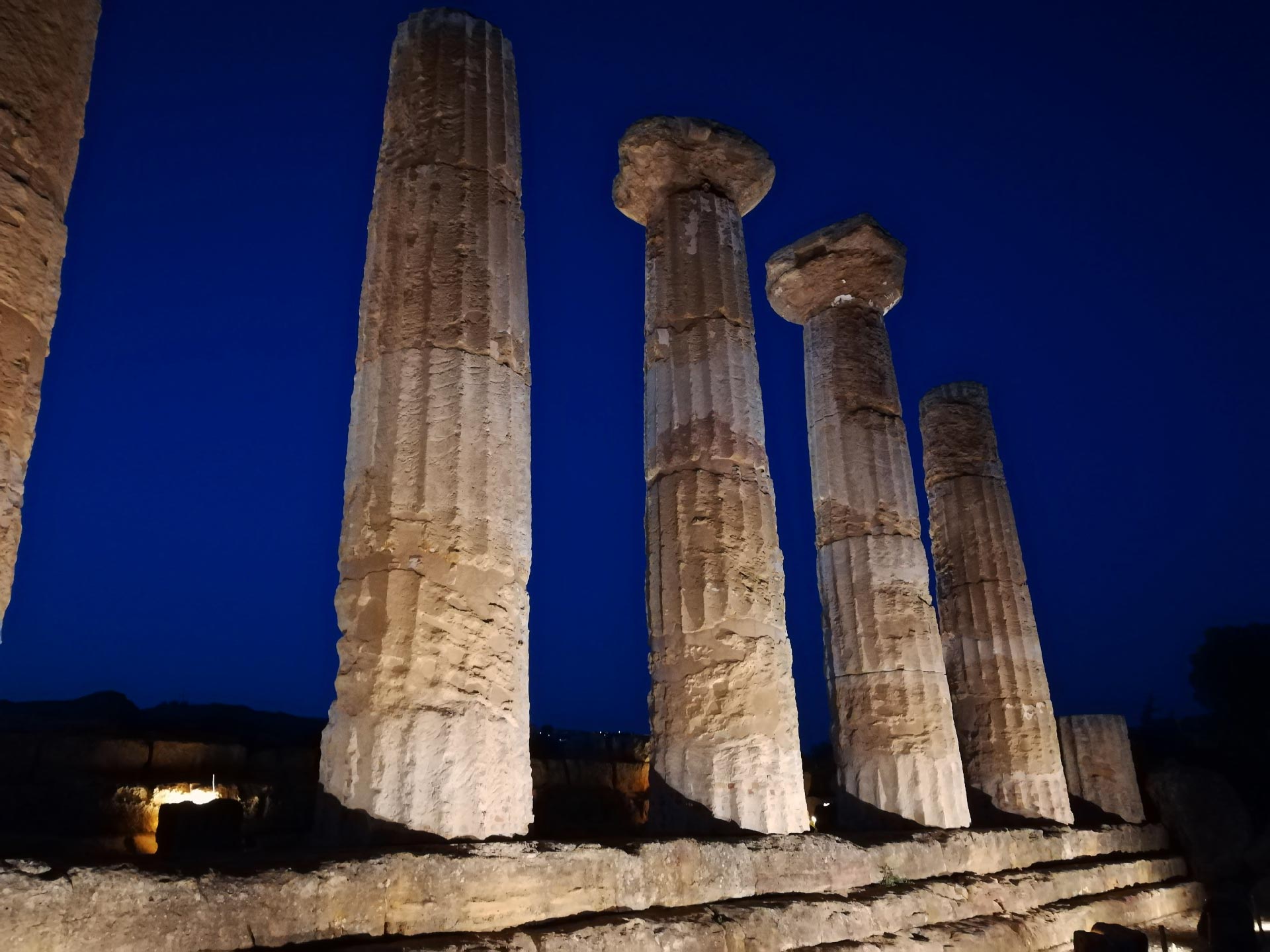 The Valley of the Temples: some technical info 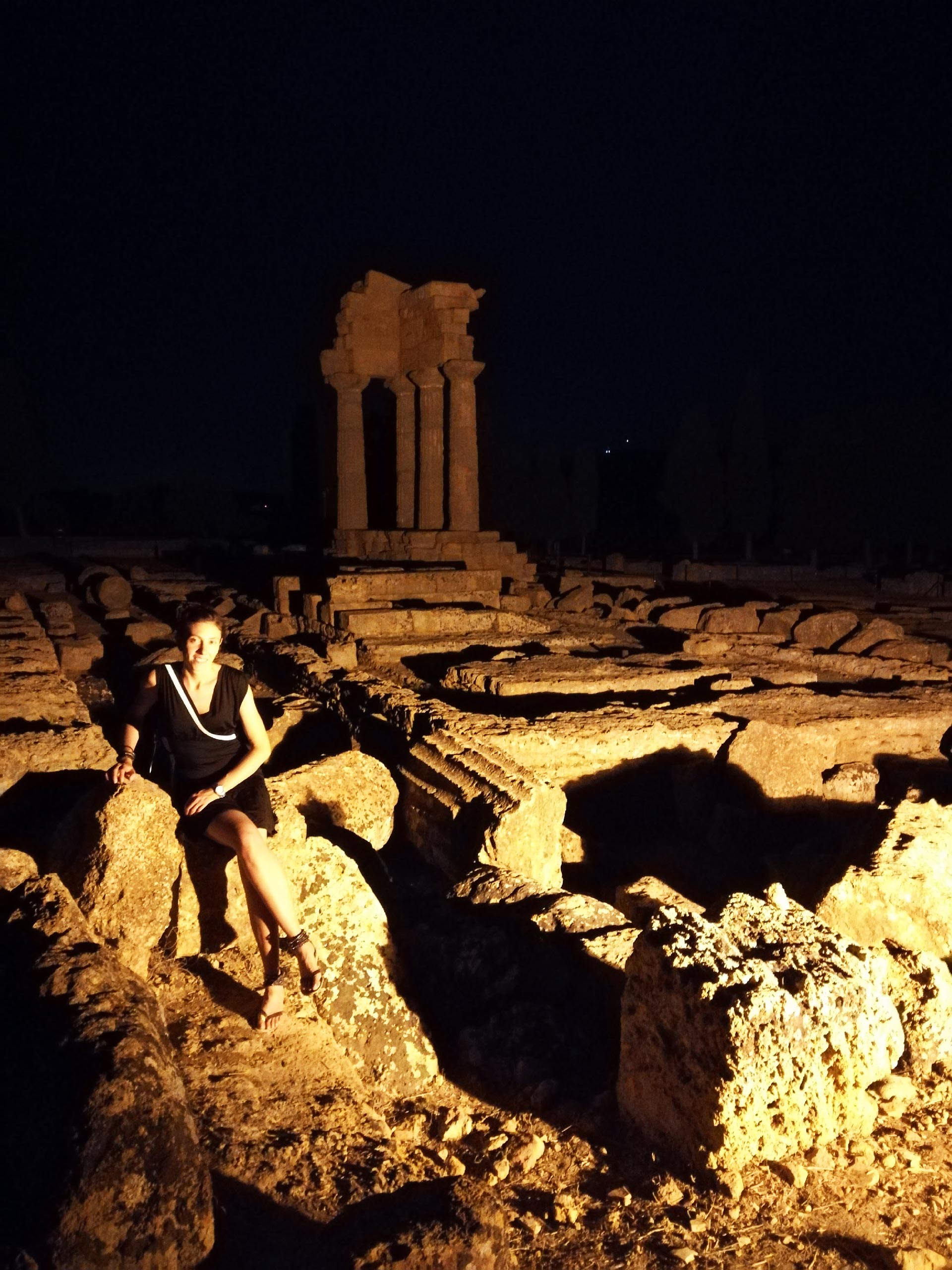